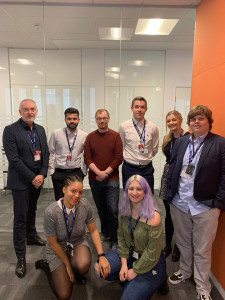 I’ve been involved in the credit union movement since back in 2009, shortly after graduating from full time education. From now to then, there’s been so much change in the credit union sector, and there’s no doubt we’re moving in the right direction. Steps forward have been taken in so many ways, including technology, capability, and awareness, to name a few. As well as this, it’s great to see younger credit union professionals coming to the fore, with new ideas and impetus.

This has been so apparent to me on joining ABCUL’s CU Futures programme. It’s a year long course designed to retain and develop the next generation of credit union leaders, and I’d highly recommend the programme to anyone who’d like to explore a career in the credit union movement. CU Futures has expanded my professional network, provided access to the wisdom of current credit union leaders and challenged me to think about my own role in shaping the future of the movement.

Recently, I was offered a new role as Finance Officer with Enterprise Credit Union that I was proud to accept. For me this is a great opportunity to expand my knowledge of the mechanics behind our credit union’s success and how this is managed. Having had a couple of different positions within ECU, it’s been great to collaborate with fellow CU Futures participants who have different experiences to me. It’s this spirit of sharing ideas and collective learning that makes the credit union movement so unique.

It’s not just limited to the UK either – In 2018, within a year of joining Enterprise Credit Union, I was selected to attend the annual conference of the Federation of Community Development Credit Unions in Florida (now known as “Inclusiv”), which was an incredible opportunity for my personal development and learning.

My CEO and management team have always encouraged and supported my personal development, and the experience I gained from travelling to the United States, where credit unions thrive, is something that has influenced my thinking about the future of the UK credit union movement.

I believe that the future of the credit union movement is bright. Credit unions are already investing in innovative applications of existing technology that provide new ways to access credit union services to more people than before. A new flexible back office platform that allows for greater collaboration and ease of operation is likely be the next big leap forward for credit unions.

you're better off with us